5 ERP Implementation Lessons from the Barry-Roubaix

On March 26, 2022, I participated in my first Barry-Roubaix gravel bike race. This race is known as the world’s largest gravel road race. The name “Barry-Roubaix” was selected as a reference to the famous spring classic Paris-Roubaix professional cycling race held in France. The Barry-Roubaix event has been held yearly in Barry County, Michigan and  usually takes place in late March or early April. Approximately 4000 bicyclists (registration is capped) from all over converge on the small town of Hastings Michigan.

It is a unique race course comprised of mostly rolling gravel roads, a bit of pavement, one mile of rough two-track, rocks, sand, mud, 2600 feet of climbing as well as the possibility of some snow and ice. As luck would have it, the forecast on race day called for temperatures in the low 30s, snow on-and-off and winds gusting up to 30 mph making for a wind chill of nineteen degrees. Good times!

After finishing the 36-mile course in a respectable 2 hours and 40 minutes, I had plenty of time on the long drive back home to savor the accomplishment. While I rested my weary legs and reflected on what I had just achieved, I realized there were some definite parallels between the Barry-Roubaix race and the challenges of implementing a new ERP.

Lesson #1: You must be prepared and adapt.

In preparation for the cycling event, I dedicated myself to proper training leading up to race day. I spent time riding both indoors and outdoors almost daily. You simply cannot just show-up on race day, or your ERP go live day for that matter, without doing the necessary prep work and expect to reach your goal. It also helps to have a plan and make sure that you’re properly equipped. Keep in mind that even the best laid plans for success can be submarined by the unexpected. Whether your obstacle happens to be unfavorable weather conditions or unforeseen functional gaps between the software & your processes, you need to be certain you can adjust on-the-fly to ensure success.

Lesson #2: Having a good partner makes the work easier.

In the case of a cycling race, having a good partner helps you stay motivated while you take turns drafting behind one another. In cycling, studies have shown that drag reductions between 27% and 50% are achievable by drafting. My riding partner Mike and I certainly took advantage of drafting whenever possible to battle against the strong headwinds. With ERP implementations, having a good partner is a critical factor in the overall success of a project. A strong ERP implementation partner can take the lead when necessary and help lighten the workload of configuring the system properly, training the users, and performing data migration tasks. After all, you probably still have a full-time job running your business day-to-day, right?

Lesson #3: It helps to have a great platform on which to work.

In the case of the Barry-Roubaix race, I was thankful to be pedaling my brand-new OPEN gravel bike with a frame made of super-light carbon fiber. It also has an excellent range of gears for the steep climbs and a pair of wide, knobby tires with superior grip that helped me to navigate the sloppy, sometimes treacherous conditions. Having a great bike as my platform meant I didn’t have to dismount and walk at any point during the race.

The same holds true with an ERP system. It is critical to have a flexible, powerful, robust platform that leverages the latest technology and enables you to operate and grow your business successfully. I certainly would not have wanted to ride an old, fixed-gear bike using antiquated technology in this race. When it comes to choosing a software for running my business, I’d also want to be sure that my ERP software platform is a top-notch one as well. (Like NetSuite, of course!) 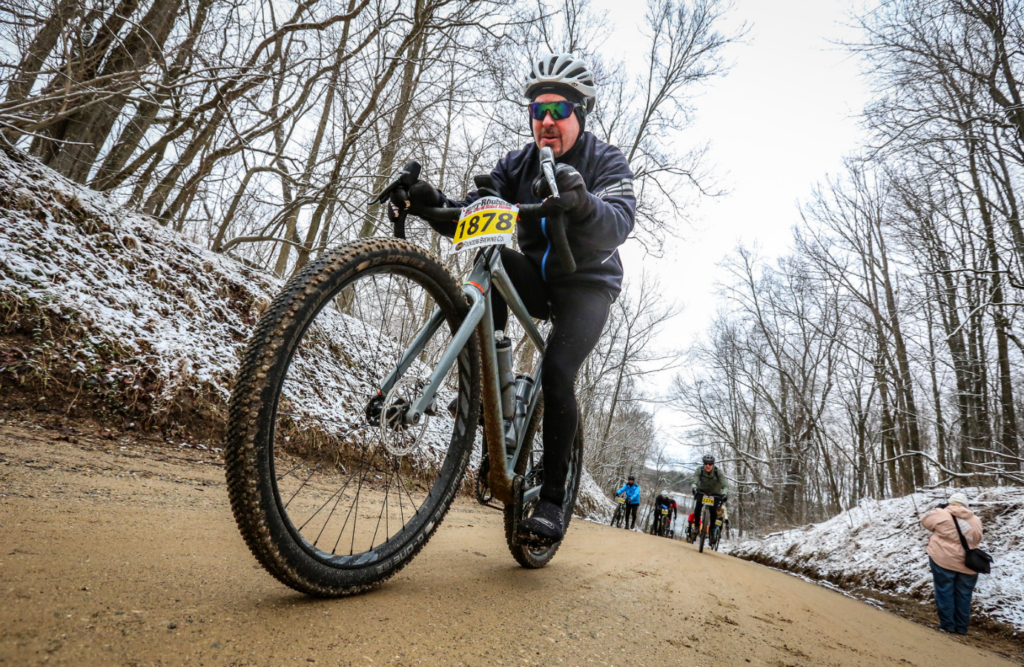 Lesson #4: You have to accept it will be a little unpleasant.

After completing an ERP implementation, how many people do you think say: “Wow, that was a totally awesome experience! Let’s do that again!” ?  (Um…. yeah…)  For many, the same might also be said for participating in a cycling race being held in the upper Midwest in March. That is, unless you are a glutton for punishment like me. While I’m someone who is passionate about both ERP software (my work) and cycling (my hobby), it’s not always rainbows and unicorns when it comes time to execute. Bottom line: You should not be discouraged if at times the conditions along your journey have you feeling a bit uncomfortable.

Lesson #5: You need to push harder as you approach the finish.

In the later portion of the race, there is a segment late in the course that is aptly named “The Wall”. That is where both of the pictures above were taken and where weak legs can force some racers to dismount and walk instead. “The Wall” is a steep 11.7% grade climb of 100 feet of elevation in less than two-tenths of a mile. It is the last big climb of the race before crossing the finish line. Inevitably, we all run into a wall (or two) during our ERP implementation projects. When faced with such walls we need to continue to push forward, remain steadfast in our resolve and commit ourselves to reaching the goal of going live.

Whether you’re taking on an early-season bike race or tackling an ERP implementation, both endeavors will most definitely test your willingness to persevere and accomplish what frequently seems like a daunting endeavor. Even if you do have a great partner, a great platform, are prepared and adaptable, the challenges may still feel overwhelming at times. However, keeping these 5 lessons in mind might help you realize that you can ultimately achieve your goal.

After crossing the finish line of the Barry-Roubaix, there is a street party sponsored by a famous craft brewery located in Grand Rapids that helps to celebrate the racers. When you and your team do cross the ERP implementation finish line & go live, it should definitely be a time for celebration. So be sure to take the time to congratulate your team for a job well done.  Cheers!

And, hey, we love promo too! Check out our killer tools for all industries today.